As mentioned in the December 2020 news update, research on garlic rot has been very active in France in recent years. The garlic industry, led by Prosemail and INRAE, is driving this new initiative. A major point of this initiative is the thesis written by P. Chrétien between March 2018 and February 2021 under the scientific supervision of C. Leyronas and C. Morris (Plant Pathology unit, INRAE Avignon), with funding from a CIFRE grant and from Prosemail, Alinéa and the Lautrec Pink Garlic Association. The thesis, from which the abstract can be freely downloaded at https://tel.archives-ouvertes.fr/tel-03211009, produced several significant results.

A survey was carried out over 3 years (2017-18-19), in the Drôme district and in the South-West region, on 53 batches of white garlic, 48 batches of pink garlic and 31 batches of purple garlic. A total of 5,493 cloves were peeled and examined in these 132 batches*. 55% of them showed typical symptoms of garlic rot. The number of cloves per head with symptoms was found to be significantly higher in the purple and white varieties than in the pink varieties. This is surprising as it’s the opposite of what growers observe (more post-harvest losses on pink garlic). The fact that, in the thesis, even garlic rot spots of a few millimetres were counted may explain this result, since not all small spots develop into symptoms leading to the heads being downgraded.

Of more than one thousand Fusarium strains identified by molecular biology, 94% belonged to the species F. proliferatum and 6% to the species F. oxysporum. Both species were found on white, pink and purple garlic varieties and in both production regions. After inoculation onto cloves under controlled conditions, a subset of 122 strains of F. proliferatum and 6 strains of F. oxysporum confirmed their ability to reproduce symptoms.

The literature indicates that F. proliferatum is a polyphagous fungus, i.e. it can attack several plant species. In an ongoing project (OCARINA, funded by INRAE), the Plant Pathology unit is investigating whether F. proliferatum of garlic can be harboured by species grown in rotation with garlic (wheat, maize, sunflower) and thus whether these species can serve to transfer the inoculum of the fungus between two garlic crops. In addition, the OCARINA project will be used to assess whether F. proliferatum is spread through the air or whether the fungus is spread mainly in the soil.

Following inoculations of cloves in the lab and microscopic observations, it appeared that colonisation of garlic roots by F. proliferatum is facilitated by roots emerging, creating natural wounds and cell debris. The fungal mycelium does not enter healthy cells and seems to have to damage them before growing into them. These results, available in the following article https://oajournals.fupress.net/index.php/pm/article/view/11103/11618, show it is possible for garlic cloves to become infected when the roots emerge. However, airborne infection of garlic cannot be ruled out and should be explored (in progress in the OCARINA project).

Research will carry on, particularly to continue the development of the detection method begun in the thesis and the identification of inoculum reservoirs begun in the OCARINA project. Some of the activities will be carried out as part of the BEYOND project (2021–2026, ANR funding) and potentially in the GARLIC project if it receives funding from CASDAR. This project has already been submitted under the “Seeds and Varietal Selection” call for projects and, if it is funded, will be carried out in close collaboration between INRAE, Prosemail and the Avignon University. 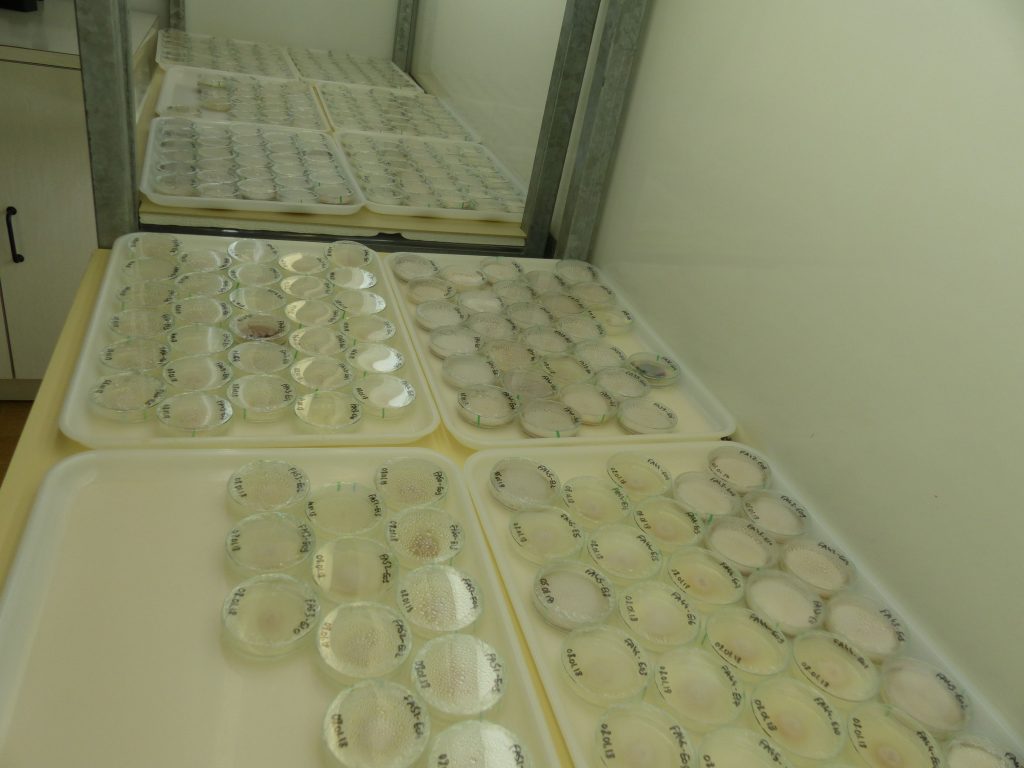 Caption: Cultures of fungal strains isolated from symptomatic garlic tissues. In 3 years, 2,700 strains have been isolated, making it possible to formally identify F. proliferatum and F. oxysporum as being responsible for garlic symptoms in France (© INRAE).